This week has been quite an intense week of prayer, worship and fasting. My local church are still doing daily prayer meetings where we’ve been contending through prayer for the people around our area. I’ve done (wet) fasting of various lengths before, but I’ve never done a dry fast before. I’ve been doing my first dry fast this week. I had been without food or water for a few days and the following happened as I was going into the third and final day of the dry fast.

On Thursday night I went to bed as normal but was woken up at 3am and felt very strange. I felt heavy and could not move. I then had a series of fits in what seemed like intermittent episodes of epileptic seizures (even though I’m not epileptic). I looked at my hands and couldn’t lift them. My whole body didn’t feel right and I thought I was dead or possibly in the last moments of dying. I remember having an experience before where I woke up and couldn’t move but my body was still asleep. This was nothing like that at all.

Something didn’t feel right. It was black and I noticed a strange bright shadow in my peripheral vision, just off to the right. I then remember getting angry and attempted to lift my head to get a better look, but I couldn’t move.

When dealing with demons or any evil spirit, we are supposed to use the name of Jesus, but in that moment, I was so angry at this thing that was in the room that I did not think or remember any scripture. Instead of using the name of Jesus, I looked in the direction of the bright shadow and furiously shouted an expletive at it.

I know that swearing at a demon is not scriptural, and I did not think about this at the time, but it seemed to work! Whatever it was disappeared. I then slowly started to come around and then was able to get up. My fiancé was still sleeping so my furious expletive-laden command for this thing to go must have been done in the spirit as I’m sure I would have woken her up otherwise. I decided to go downstairs and pray. I fell asleep on the sofa while downstairs.

Just before 8am, while I was still downstairs, my fiancé sent me a text message. She said she had woken up in the middle of the night and couldn’t breathe and that it felt like someone was strangling her. She knew I had gone downstairs but in no way did she have any idea of what had happened to me during the night. This had never happened before to either of us, yet in a single night both of us were separately attacked. This is not a coincidence. 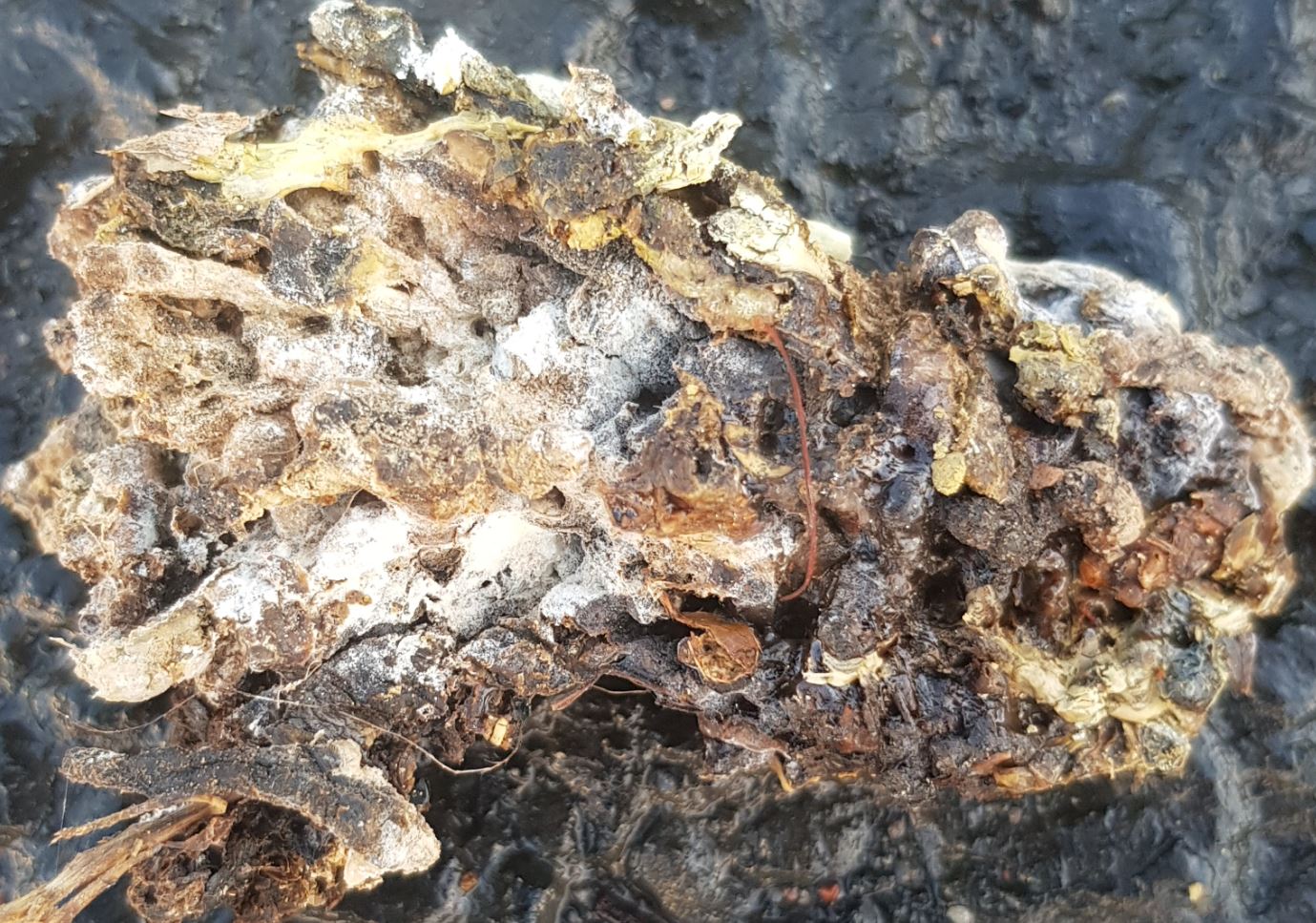 It appeared to be some kind of root, from a plant or vegetable. It also looked like part of a small animal that had been in a state of decay. Like the root and the small animal were mashed together. I bent it a bit and it had like black goo inside and was white and putrefied on the outside. Whatever it was, it was foul. Absolutely disgusting. I threw it on to the main road just outside the house and washed my hands.

The next day I went to sleep again. During the night I was woken by my fiancé suddenly sitting up in bed and screaming. It wasn’t like a normal scream but like a terrified shrill. I sat up and looked around the room but saw nothing. She told me she saw the figure of a man wearing yellow standing over me on the bed. It had gone now. We decided to go back to sleep.

As I lay down, I closed my eyes and lay there for about a minute. I then felt coldness at my feet. This coldness then progressed like a wave from my feet and up my body and to my head until my whole body was cold. I thought I just needed to warm up. Sure enough, after a few moments, the coldness disappeared.

However, after another 10 or so seconds it happened again in exactly the same way. I felt cold at my feet and then another wave progressed from my feet up my body to the top of my head until I was fully covered in coldness again. This lasted for a few moments and it faded away again. It then happened a third time. Exactly the same each time.

I knew this wasn’t the cold. Something is not right. Something is still in here with us. I remember waking up in the night and being fearful for no reason before. This was before I knew Jesus. This was about ten times worse than that, but I wasn’t afraid. I most definitely would have been terrified if this had of happened to me before I knew Jesus. I started to get angry again.

I should’ve bound it and cast it into the pit there and then. I didn’t. The reason why I didn’t was because my fiancé was just freaked out by what she saw and I didn’t want to alarm her further by sitting up and saying something out aloud because it would confirm to her that something was still in the room.

So, I lay there for a few minutes, feeling this thing working on me. Wave after wave after wave of coldness, just waiting for it to stop or go away, but it didn’t. Then I realised how foolish I was in allowing this to go on. I sat up and told my fiancé what was going on and then said aloud “In the name of Jesus Christ of Nazareth, I bind you and I cast you into the abyss in Jesus name”. I waited a few moments and then lay down again. It stopped. I lay back down and was able to finally get some sleep.

When I got up in the morning, I felt awful, like I had been in a fight. I felt sore, irritable and had no energy. I’m convinced that if I had of dealt with the spirit in the first instance, instead of allowing it to work on me for a time, then I would not have had almost 2 days of my life wrote off. I always seem to learn lessons the hard way! This can be good, as a lesson learned the hard way is a lesson that is not easily forgotten – but for 2 days I felt awful.

This is obvious advice but do not tolerate demons or evil spirits. Whether there are kids there and you worry your words may frighten them, or perhaps if you are in a public place and worry that people will think you are a weirdo - it doesn’t matter! You can’t allow these things any freedom to do whatever it is they are doing. Don’t mess about. Get rid of it and do it quickly. Think of it like spilled red wine on a white carpet. The faster you act, the less damage there is. Don’t mess about with it. Bind it in the name of Jesus and get rid of it. Use the name of Jesus and send it to the abyss where it will enter but will not be able to get out (at least until the time of the end – see Revelation 9).

I found myself telling my neighbour and other people about our experiences these last couple of days. When I went to church last night, we had a guest speaker who anointed and prophesied over us at the end of the night. The message to me was not to focus on the enemy and what he is doing, but instead to focus on Him (the Lord) who is above all. On further reflection, I realised also just how quick I was in telling people about what had happened to myself and my fiance the last 2 nights and how this contrasted with how slow I am in telling people about Jesus and what he did for me.

Having been targeted in this way is good - almost like a badge of honour. Not that I take honour from the enemy, but rather, it is good to have suffered a little for Christ as He has suffered infinitely more for me. That the powers of darkness feel they need to resort to such measures is further confirmation not only that they are real and exist, but more importantly that our prayers of supplication have been making a real difference in the surrounding area (if not the world).

It is amazing to see the power of prayer in action, but I think the results that we are able to perceive are only the tip of the iceberg. On its own, prayer is powerful. It is interesting that I was attacked during the last day of a dry fast. It is often said that fasting can make our prayers more potent. It turbo-charges our prayers as we strip the flesh of its desires. The evidence seems to support this based on the timing of the attack.

Jesus said did not say “if you fast”, but “when you fast”. We are expected to fast. If you have been born again and have never fasted then I would encourage you to start (just a single day at first).

I guess if we could see the effect of our prayers (when we pray for the right things and pray for them in the right way), then I’m sure all of us - including myself - would do it far more often. This goes for fasting too.